Cornerstone to the meaning of Austin, since its selection to be the capital of Texas in 1839, is its identification with the environment to uphold the health and quality of life for its residents and visitors. The transition from frontier town to small city brought with it the economic pillars of government and education, infrastructure, industry and the characteristic parks, pools, lakes, hills, hike-and-bike trails, and nature preserves that foster an active and quality outdoor life mostly defining Austin until the 1970’s. [1] From then until now, the transition from city into metropolis now poses the biggest challenge to Austin in retaining it’s defining balance of the built and natural environment with population increase, growth and climate change at the forefront of the city's desire to be a national leader in sustainable planning and development. [5] Early 1900's growth patterns can be seen below in figures 1 & 2, when at the time, population density, building technology and sustainable practice were not yet in the public sphere discourse however,  they would begin to take shape with the 1928 plan. 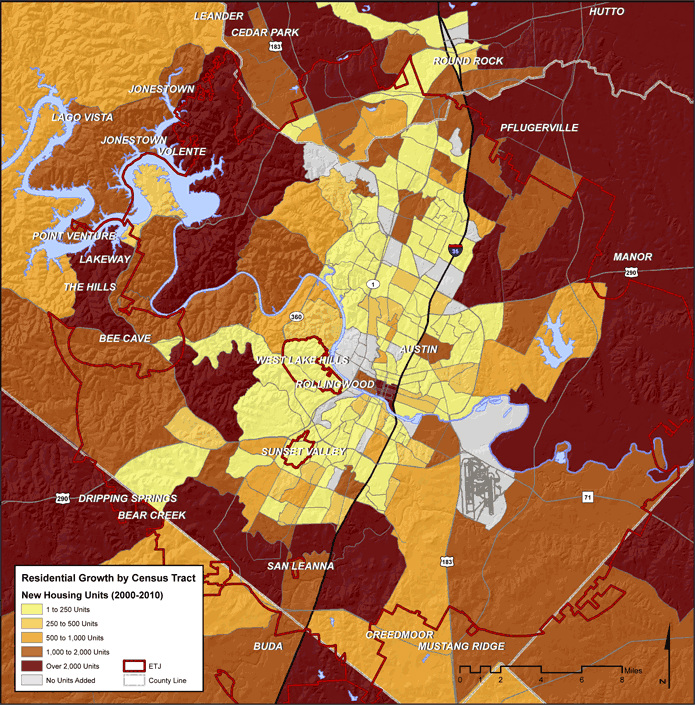 However, in addressing the challenges, Austin is a prominent, southern-belt leader as a successfully growing sustainable city.  “Austin holds its Green Building Program as the first of its kind in the nation, received recognition in the 1998 Rio de Janiero environmental summit and has served as a model sustainable city for programs in twenty-six other cities.”  [1] And recent sustainable innovations includes the Austin Climate Protection Plan in which goals of carbon neutrality and technology regulations are prominent .

The Center for Sustainable Development at UT Austin, School of Architecture also manages the Central Texas Sustainability Indicators Project, a formidable diagnostic use, and project-promoting tool for discourse on directing efforts towards policy that promotes livability across regions. [6]

So there is top down political decision making and bottom up community encouragement and participation to discuss and exchange ideas and the sustainable vision of Austin’s development. Below, figure 3, is an Image of Residential growth more dominant in the fringes of Austin. A challenge is to sustainably address the increased development and maintain the ability to carry an increasing population.
Forming Austin’s Environmental Value

The 1928 plan, the first plan since the 1839 plan, marks the conscious efforts at sustainable practice before the sustainable movement and development had been fully articulated. The plan called for alleviating the existing conditions around 1924, addressing debt, an ill equipped fire department, run down water and electric system, a poor hospital, the lack of paved streets and the lack of any parks. The city was, according to a U.S. Department of Health survey, in a “deplorable condition from a health standpoint.” [5] So the efforts of Alexander Wooldridge and Adam Johnson, mayor and city manager respectively in the 1920’s, proposed in the 1928 plan, “an extensive system of parks, playgrounds, and boulevards and a host of other farsighted ideas.”[5] Bonds were issued amounting 4.2 million 1920’s dollars to develop streets, sewers, parks, schools, a City Hospital, the fire department, public library and an Airport. It appeared to turn for the better and the U.S. Department of Health agreed, placing it ahead of all other Texas cities and fifteenth in the nation compared to similar sized cities. Pools, playgrounds, parks and a Municipal Golf Course provided recreation that fostered health and a landscape that would shape the meaning of Austin. Of honorable mention in the newly shaping Austin was Barton Springs, a 1,000-foot-long natural pool of which Austinites hold as a space of place making and fostering the perceived value of the environment. 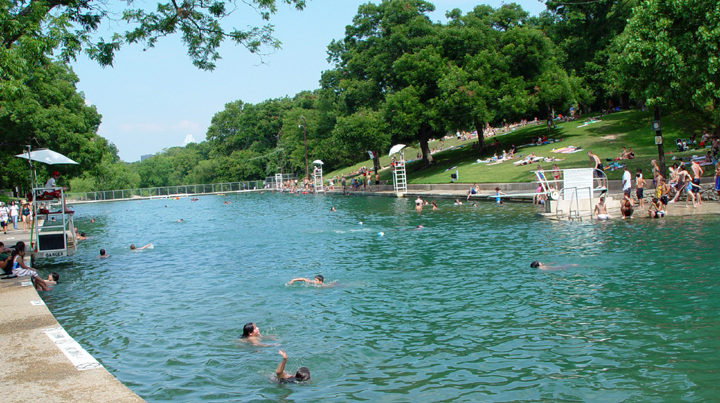 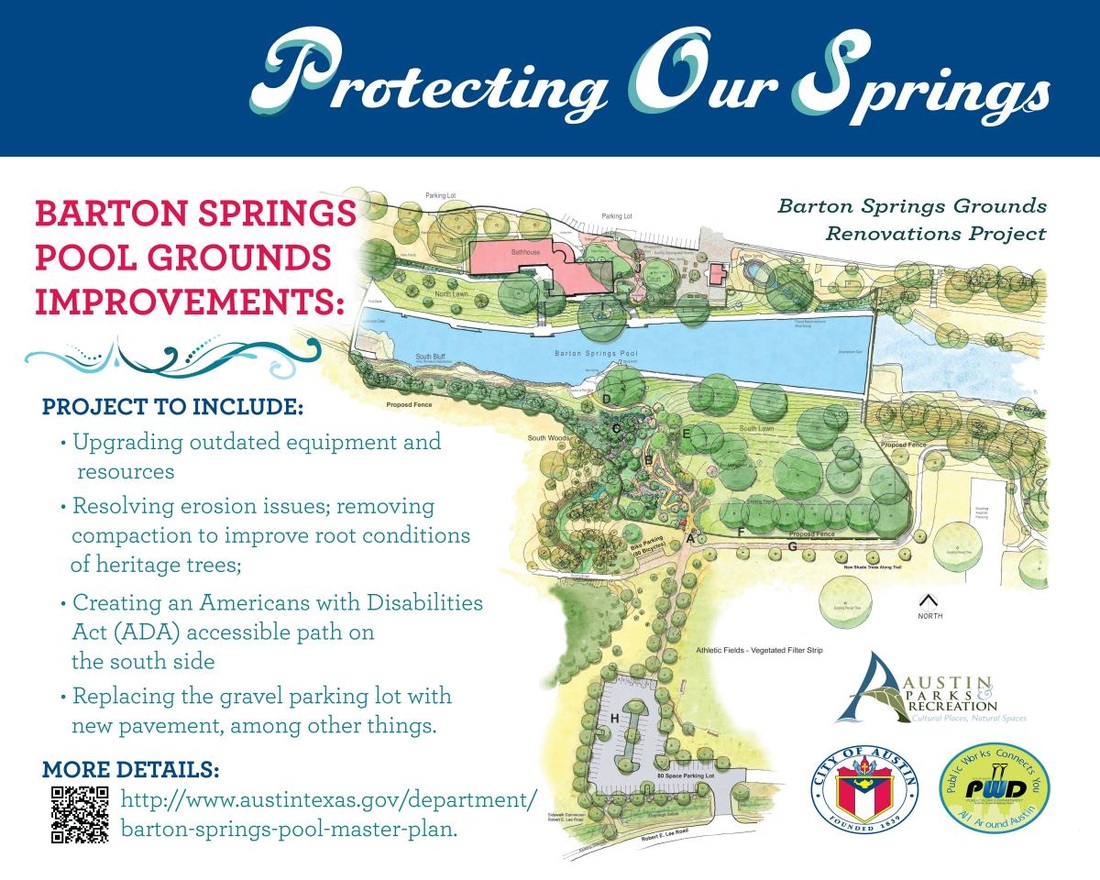 Sustainability is a term that is generally concerned with the ecology, economy and social equality that meets the needs of the present without jeopardizing subsequent generations ability to do the same. [4] Its application and interpretation may vary by city depending on the degree of prioritization of the city and it’s people. In Austin, some found value in the quality of life through the environment of the city. These people see sustainability as more of an imperative over others who highly favor profit and may turn a blind eye to deleterious development. However, it may not always be the case that the positions on sustainability are as polarized today, but this was a challenge in the past and a challenge of the future. There is always middle ground and exceptions but this is how people viewed the debates on Austin’s growth during the 1980’s and 1990’s.

Particularly during this time, the conflicting discourse came to be known as a bicameral system match of “environmentalist vs. developers.” It was the ideas of the future of Austin development and it’s meaning and value that were tied to two-sided view on the positions of growth. One, the “growth machine” concerned with bureaucratic influence to maximize economic output with less concern for the environment or landscape, and the other, the “green machine” who held interests in sustainable growth that preserved the environment. Between 1997-2003, “smart growth” dominated as a middle ground between environmentalists and developers. Smart growth is an outcome of the recognition that people live in Austin because of the environment and therefore the environment is good for business. It was a form of cooperation. Much of the success of smart growth policy can be attributed to the 1997 Green Council who stood on three principles of the economy, environment, and equity for Austin’s growth. Now sustainability is the dominant regime with a focus on regional communication on collaborative initiates for local and larger issues. [3]


INNOVATION AND SUSTAINABILITY TODAY IN AUSTIN

To jump to the conclusion, the environmentalists still have political clout and influence in Austin today and with their position, many energy and building codes called for green energy and green building organized by business people and environmentalists. Austin strives to become a green city, a place based on environmental meaning and a place at the forefront of adopting strategies meant to specifically alleviate issues of global climate change. [3]

For example, the Austin Climate Protection Plan sets the goal becoming a carbon neutral city by 2020.
The plan is aggressive and strives to place Austin as the leader in the nation when it comes to confronting climate change with technology and sustainably design and initiatives. For instance, the 2010-2011 Climate Action Report contains innovative and progressive approaches to sustainability such as tree planting as part of the solution to high temperature in the city, the city is undergoing carbon sequester research in Biochar, also implementing forms of measuring greenhouse gas emissions and asserts methods of accountability and incentives and information for businesses to go green. [10] For individual persons, the city has developed a mobile app that informs and encourages citizens to make greener decisions in their everyday lives in categories such as transportation, water conservation, energy savings and waste reduction to name a few. [11]

In addition, the 2012 Climate Protection Resolution report, contains clear goals, objectives and progress such as implementing building codes that require all new single-family homes to be zero net energy capable by 2015 as part of a larger goal (goal #3/5) of implementing the nation’s most energy efficient building codes and pursue energy efficient retrofits and upgrades to existing building stock. [9] This is a city who has found the meaning of sustainability and is setting precedents and high standards for the rest of the state and encourages the nation and world to follow suite. These few examples are part of the apparent commitment to make Austin a highly livable area, that is in, as of 2011, climate program manager Zach Baumers words, a “safe, environmentally healthy, economically strong, artistic and creative and family friendly neighborhoods.” [11]

Lastly, since sustainability, on its own, is such a broad category of thoughts and actions, specific characteristics are necessary to identify and measure success and progress of pursuing a sustainable city. The operationalizing of sustainability in a city is often a result of policy, programs and plans that are developed at the federal, state, city and/or any tier of organization with jurisdiction or partnership with government, that addresses more specific measures of progress according to the introspectively identified needs of the communities represented and with the recognition of their impact to larger global systems and the biosphere. Some of the variables include the following: “air quality, biodiversity, energy, climate change, ozone depletion, food and agriculture, hazardous materials, human health, parks and open spaces, economic development, environmental justice, education” [2] and many more. And several sustainability indicators measure Austin, Texas to rank among highest of American cities that “take sustainability seriously.” [2]

Finally, Travis County in Austin is part of a multi regional project that involves the research, organization and dissemination of sustainable progress measurements in report form to be used as a diagnostic tool suitable for use in dialogue, decision making and attention of efforts in the goal towards sustainability. [12] The Central Texas Sustainability Indicators Project is this project. The idea is that data, good indicators that are easy to communicate and understand can provide more informed decision making, participation and collaboration towards definable goals at the regional level. Below is a distribution map of open space in Austin. This indicator of sustainability from the indicators project shows an uneven distribution of open space in the west side of Texas and leaves the east side underserved. A challenge here is to ensure equity as fundamental to the cities sustainable development. [12]