History of the "negro district"

The 1928 Plan for Austin called for the establishment of a Negro district removed from the city center, provided with separate facilities common in the Jim Crow era.  Schools, housing, and municipal services were made available to African-American residents exclusively in East Austin, essentially forcing the population to migrate towards this designated area.  As the plan notes, "... All facilities and conveniences [will] be provided the negroes in this district, as an incentive to draw the negro population to this area...There has been considerable talk in Austin, as well as other cities, in regard to the race segregation problem...This problem cannot be solved legally under any zoning law known to us at present. Practically all attempts of such have proven unconstitutional.” [1].  Urban planners of the era were able, under Jim Crow laws, to cluster all of the necessary services and facilities available to African-Americans and other minorities to the east side of today's Interstate 35, formally East Avenue. This decision was justified by the argument that in doing so, the city would be spared the expense and hassle of establishing separate "colored" and "non-colored" facilities throughout the city.  Restrictive covenants legally prohibited minorities from purchasing homes anywhere except for East Austin, and those who continued to live outside of East Austin faced severe prejudice and many were refused basic services in an effort to make it clear that they were not welcome anywhere else in the city [2].  This resulted in East Austin becoming an almost exclusively minority area.

The U.S. Housing Act of 1937 reinforced the practice of segregation by requiring public housing developments to be racially exclusive in order to receive federal funding [3].  Operating within the bounds of the laws at the time, Austin  grew as a city with marked and obvious racial segregation patterns.  Rosewood Courts, the nation's first federally funded public housing development for African-Americans, remains today in East Austin as a landmark noting the important cultural and political history of Austin as well as the nation.  As East Austin developed, it was greatly underfunded and deprived of basic services and facilities afforded to the rest of the city. Minimal infrastructure, unpaved roads, nonexistent police protection, and the social ills that are typically borne of massive poverty were standard in this "Negro district" [2].  Despite a lack of investment from local and state government, East Austin became a culturally significant neighborhood for African-American residents, who overcame the neglect of their government leaders and instead took matters into their own hands to create a vibrant and supportive community of their own.  Ironically, it appears the integration in the 1960s actually put East Austin at a great disadvantage as the population dispersed towards other areas and the community fell into general disrepair.

Gentrification & the future of East Austin 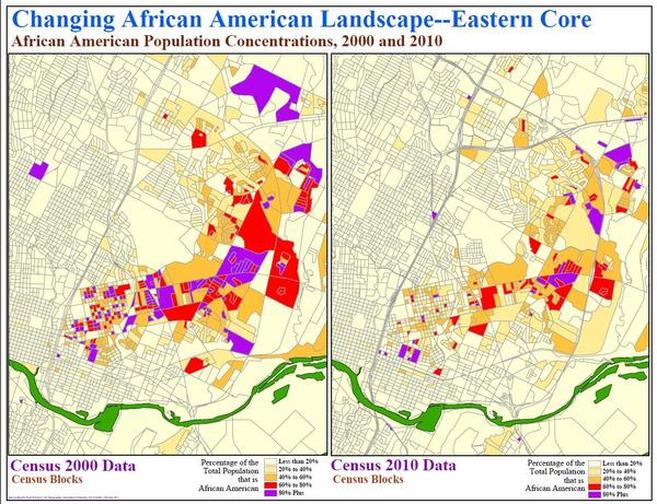 Diminishing African-American population in East Austin over past decade [1]
Merriam-Webster defines gentrification as "the process of renewal and rebuilding accompanying the influx of middle-class or affluent people into deteriorating areas that often displaces poorer residents."  Because these areas have been overlooked by planners and developers in decades past, they now offer prime real estate and opportunities for urban renewal projects and redevelopment at a fraction of the cost of land within the already established city center and suburbs.  Once considered the least desirable part of town, suitable only for the minorities the city sought to physically remove from the rest of the population, East Austin has experienced an intense period of gentrification which has resulted in a rapid demographic shift in the historic African-American and Mexican-American community.  In fact, Austin is the only city in the country which, despite its otherwise impressive population growth has actually experienced a net loss of African-American residents in the past decade [4].  One possible explanation for the movement of African-Americans out of East Austin is because rising property taxes and rents are no longer affordable without imposing a significant cost burden and they are seeking more affordable housing options in other parts of town. 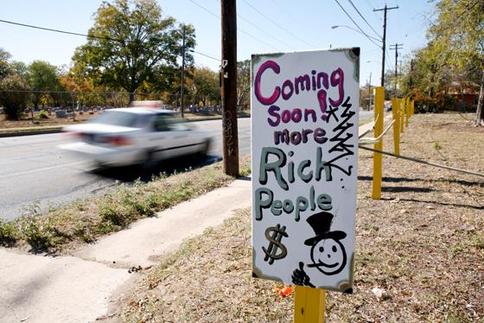 Sign on East Austin street [6]
As gentrification continues to change the cultural and demographic landscape of East Austin, the former "Negro district" is now referred to by Forbes magazine as one of America's "Best Hipster Neighborhoods", citing the area's booming music and arts scene, farmers markets, food truck industry, as well as locally owned bars, restaurants and coffee shops
[5].  Although this is a positive cultural and economic development in some aspects, the problem lies in the inability of native East Austin families to remain in the neighborhood due to the sudden increase in cost of living in the now "hip" and desirable hot spot of one of America's largest urban cities.